Written by Will Lingo
photography by Smith Hardy 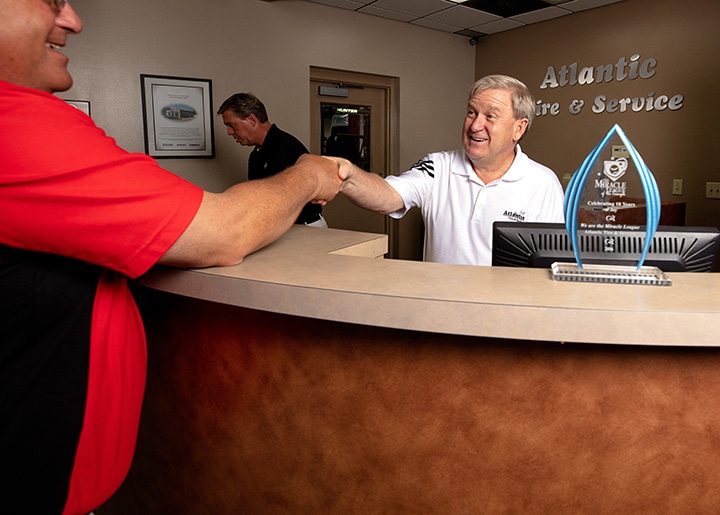 Anthony Blackman is a testament to the power of saying yes.

He grew up in Sanford, North Carolina, and attended N.C. State University as the first college attendee in his family. He started his own business from the ground up, and gives to more charities than he can count. Blackman is always seeking connection in a world that tends toward isolation.And he’s not about to slow down now. Blackman owns Atlantic Tire & Service, a local car care chain that opened its fourth location this year. The new store in Wake Forest joined the existing stores in Cary, Raleigh, and Research Triangle Park. And he has plans in place to open the fifth and sixth locations over the next couple of years.

Blackman doesn’t operate out of a corporate headquarters somewhere. He has a modest office right off the lobby at Atlantic’s Cary location, and he’s as likely to be out of the office as in it, talking to customers or employees. He’s on a crusade to make people feel better about dealing with auto mechanics, focusing on customer satisfaction above all else.

He says he recognizes that the industry can be quite negative. “We’re very up front with people in letting them know what’s wrong and how we’re fixing it. We show people the parts we replaced and what we did. If we replaced your air filter, I’m going to have it in a plastic bag to give to you to show you why we replaced it. Above everything else, we want people to know when you need us, we’ll be there.”

That same attitude extends beyond the business for Blackman and his wife, Beth. Blackman says he made charitable donations to 44 organizations last year, and a story several years ago in the Triangle Business Journal estimated that Blackman donated roughly 11 percent of his revenue to local nonprofits and community organizations. The reasons he does it are myriad and go beyond simply writing checks. The Blackmans have served in leadership roles for charitable organizations and civic groups, and Blackman has served as chairman of both the Cary and Morrisville chambers of commerce. It goes back to the way he was raised.

“We didn’t have a whole lot, but we shared, and that’s what has always meant the most to me,” he says. “When people help people, we have a much better chance of solving problems.”

Blackman says there isn’t a plan to their giving: They do what they can when they can. “I know my accountant says my bottom line would be a lot better if we didn’t donate so much, but I know I wouldn’t be any happier.”

In conversation with Blackman, it’s not hard to trace the origin of both his business success and servant’s heart to his family. They taught him the importance of hard work, and it was his uncle’s two-bay service station in Vass, North Carolina that planted the seed of auto service in his mind. “When I was a little boy I remember seeing my uncle go to the Coca-Cola machine, and he would take a Coke out and not have to pay,” says Blackman. “That made an immediate impression on me. But as I got older I realized his business made him a pillar of the community and allowed him to take care of his family.” 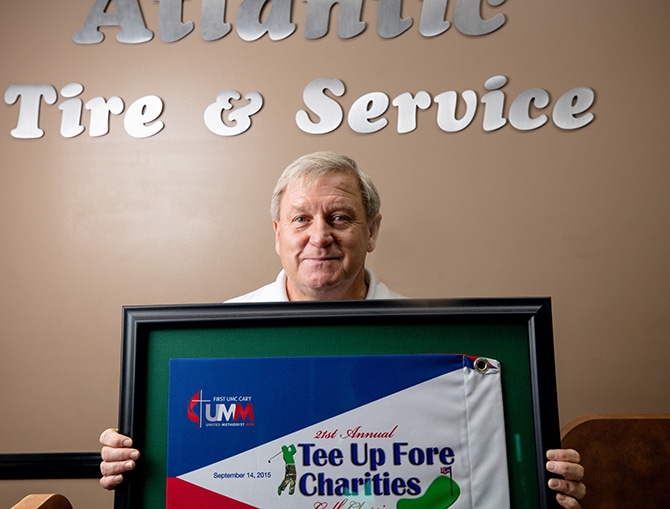 That inspiration sat on a foundation built by his parents, however. His father worked at a textile mill in Sanford, and his mother raised four children. He remembers his first job, as a paperboy delivering The Sanford Herald. On a snowy day, he decided to skip one of the steeper streets on his route, figuring no one would know the difference. By the time he got home, one of his customers had already called to ask where his paper was, and his mother was waiting for him.

“I learned right then and there: You deliver on your promises,” says Blackman.

And that was a two-way street. As determined as his parents were to make sure he made all his deliveries each day, they also impressed upon him how important it was to collect his money each week.

“My mother was a business woman at heart,” he says, “she just directed it toward managing our home because she had four children.”

His mother’s influence truly shines through in Blackman’s dedication to service, however. He recalls the death of his grandfather when he was young. The family was using a local funeral home to handle the arrangements, and went with their housekeeper, who was African-American, to pay their respects.

Someone stopped them and said, “We don’t allow coloreds in the funeral home.” Blackman’s mother did not raise a fuss. She acknowledged the policy and simply said, “We’re taking our granddaddy out of here.” They took their business to another funeral home and never returned.

Blackman says he didn’t fully understand what was happening at the time, but he did get the message that if you wanted the world to be a better place, you had to take an active role in making it that way. “That sense was instilled in me at a very early age,” he says.

You see the evidence of his work all over his office. Awards or other tokens of appreciation from the Miracle League, a local nonprofit that provides the opportunity to play baseball for children with special needs; the Carying Place, a group in Cary that provides transitional housing for homeless families; the Boy Scouts, the USO, the Rotary Club, the Salvation Army. It’s obvious that Blackman thrives on human connection, and values giving more than receiving.

“When you give back, you hope other people see the value in that, and do something themselves.”

The Carying Place clearly has a special place in Blackman’s heart, not only because it has an intensely local focus, but because it is about helping people through a direct relationship, and giving them the skills to become stable and self-sufficient. He talks about not throwing money at problems, about actually getting out and helping people, and The Carying Place seems to check all of those boxes.

Leslie Covington, executive director of The Carying Place, says the Blackmans have helped the organization through everything from donations and event sponsorships to leadership on their board.

“So many people like Mr. Blackman will assist from year to year because they see what I saw coming here,” she told Tire Business when it named the Blackmans the recipients of the 2016 tire dealer humanitarian award, a national honor dating back 25 years. “They see progress. They see people making changes in their lives and doing it with the assistance of others and a hand up, but not a hand out.”

“Their presence gives us merit. Because they support us, a lot of people will say, ‘You know what, that’s got to be some good stuff going on over there.’ And when their light is shining, it shines in someone else’s direction, and it gives us more attention and allows us not just to raise money but to raise awareness of what we do.”

Don’t get the idea that business is just a sideline to Blackman, though. Building a thriving business is what has allowed everything else to follow.

Blackman graduated from N.C. State in 1977 and went right to work as a retail management trainee for Goodyear. He helped manage a store on Poole Road, and he says he enjoyed it from the start. “I love the interaction with the people.”

Even if Blackman doesn’t call himself a people person, you could make that determination for yourself. When talking to him, you’re bombarded with the names of the various people he has crossed paths with through the years, from the rich and powerful to the poor and humble.

In 1988, Blackman decided to strike out on his own, with his partner Richard Leicht. They opened Atlantic Avenue Tire & Service in Raleigh, with “$20,000 and the hope that people would come to my door.” Blackman says he faced the typical challenges of starting up a business, but his confidence did not waver. “I never thought about not succeeding.” 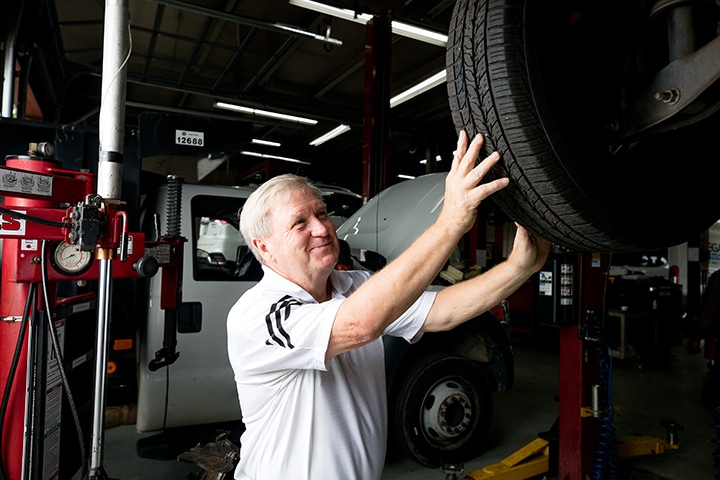 Blackman says a positive sign came early, when a woman stopped in for help with a flat tire before the business had even officially opened. “We were lucky; a lot of customers followed. We expanded from six to 10 bays pretty soon after opening.”

After 10 years, Blackman wanted to expand the business westward, and Leicht wanted to get his family involved, so they parted amicably. Leicht retained the original business, which he continues to operate in its original location on Harrod Street right off Atlantic Avenue. Blackman opened a standalone location in Cary, simply dropping the “Avenue” from the business name.

Blackman has grown his business as the Triangle has grown, relying not only on marketing to individuals but also on a strong commercial business. “Our clients are very loyal,” he says. “Rarely does someone come to do business with us that they don’t come back.”

And while he expects to have six locations open soon, it’s the vision for his seventh that gets him really excited. His first job with Goodyear brought him to Southeast Raleigh, and he says he hopes to come full circle with an Atlantic Tire location in the same area. “When I worked there, it was the first time besides my nanny when I interacted with African-Americans, and that really makes a difference in how you view things.”

He says he will never forget a young neighborhood child named Tommy Lee Morgan who came into the store asking about one of the bikes on display. Blackman let him borrow it, and they developed a long-term relationship. As the boy grew up, Blackman helped him financially and counseled him. Morgan died at a young age from drug use.

“That really opened my eyes up. I saw the challenges people are facing, and I wanted to work in a small way to help people out of that.”

Blackman says he believes people need opportunities in order to be successful, and he envisions the Southeast Raleigh location as an incubator of sorts. He says he hopes to hire local businesses to build the store, and wants to employ local residents that are in need of trainng to become technicians and mechanics. He plans to hire graduates from Shaw and St. Augustine’s universities in management roles, and he sees corporate sponsors taking their involvement beyond just being a standard business partnership.“I want to make it something the community can really be proud of,” he says. “I think it could enhance the lives of so many people. It’s just about me and my company wanting to give back to that community.”

Those plans are still a few years off, but the vision is there. As is the case with most of Blackman’s pursuits, he hasn’t even contemplated the possibility that it won’t be successful. He can already see the building, inside and out.

“And I guarantee you one thing,” he says. “There’ll be a picture of Tommy Lee Morgan in there.”