The Triangle Business Journal featured Anthony Blackman in their most recent edition.

Over the years, Atlantic Tire & Service owner Anthony Blackman has established himself as a leader in the tire dealership industry.

He serves on the national board of the Tire Industry Association and was named 2016 Dealer of the Year by the North Carolina Tire Dealers Association. His company won the Top Shop Award by the “Tire Review” trade magazine twice – in 2008 and in 2015 – and is the only dealership in the nation to have done so. 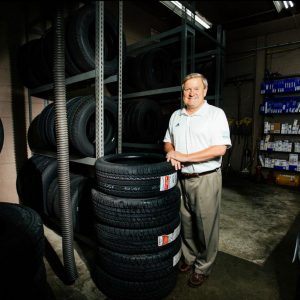 Almost 18 years after starting out with one location, Anthony Blackman now runs a $10 million business

For Blackman, though, the tire business has been more of a means to an end, a lifelong goal of one day running his own company since his days watching his uncle run a small, two-bay Gulf station in his hometown outside of Sanford. That includes just about everything that being a small business owner entails from business development and interactions with the customer to being able to give back to the local community, both financially and as a volunteer.

Blackman estimates that the company has contributed to more than 45 local charities, schools and organizations over the years. He’s been an active supporter of the chambers of commerce across much of the Triangle, the Boy Scouts, the Cary Rotary Club and, in 2013, was appointed by the North Carolina General Assembly to the five-member Economic Investment Committee. The EIC evaluates all performance-based incentive grants for corporations being recruited to the state under the state’s Jobs Development Investment Grant program.

“It’s not self-serving to do all this, it’s the right thing to do,” Blackman says, “and if more businesses would do that, communities would really be strengthened quite a bit.”

It was after several years of working in the industry at other tire shops and in management at BFGoodrich tire stores that Blackman and a partner opened their own shop on Atlantic Avenue in Raleigh in 1988.

Ten years later, Blackman left that partnership to build his own shop, an eight-bay service center on Northwest Maynard Road in Cary that at the time still had a mobile home park across the street. “There was no shopping center and not much of anything out here,” he says, “but everything fell right into place.”

In 2005, Atlantic Tire opened its Durham location on South Miami Boulevard, feeding off much of the traffic coming through Research Triangle Park. He opened the Raleigh location on Glenwood Avenue near the Carmax dealership in 2009, and he recently acquired a site near Wakefield in northern Wake County where he’s planning to build a fourth location in 2017.

But as generous as Blackman has been in the community and in training and developing his staff and workers, he can still be a frugal small business owner.

None of the store signs on any of the Atlantic Tire & Service locations include the full business name – “& Service” primarily because when he opened the first Cary location, it was going to cost an additional $2,500 to complete the logo.

Because of that, Blackman says many of the people who come to them for tire service don’t realize until they walk through the door that his shops also do oil changes, tire rotations and minor repairs.

“We don’t do paint or body repair, but we’ll do just about everything else,” he says.

About 70 percent of his business, actually, is in vehicle service and 30 percent is in tire sales. Atlantic Tire heavily markets its business through coupon inserts, event sponsorships and social media, which help bring in retail traffic, but last year about 40 percent of the dealership’s total revenue came from its corporate relationships and fleet services.

Through the story in “Tire Review,” Blackman disclosed that when his staff is picking up or dropping off customers through Atlantic Tire’s free transport service, each is challenged to bring back the names of at least two prospective commercial customers. Either he, General Manager Davis Morgan – Blackman’s first employee hire at the Cary store – or one of the other shop managers are tasked with reaching out to those prospects to see if Atlantic Tire could be considered as a primary or secondary tire supplier.

“It may not be this year, it may be next year, but sooner or later that primary guy is going to mess up,” Blackman said. “And I’m going to be sitting right here. We’ll put on a real show… whatever it takes to get that account.”